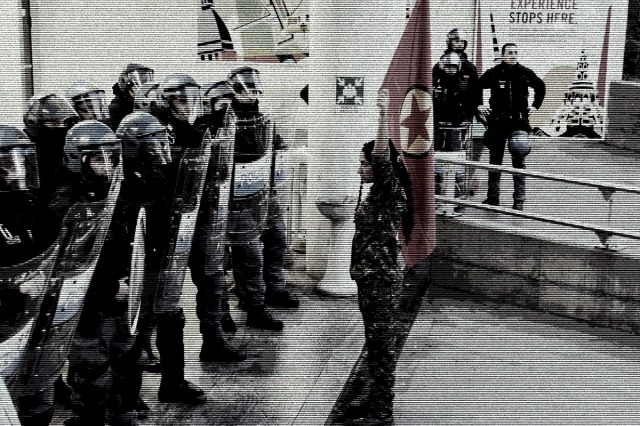 “It is not a matter of wishing success to the victim of aggression, but of sharing his fate; and accompanying him/her until death or victory.” – Che Guevara

54 days of resistance in Afrin. 54 days where the self-defense forces of YPG / YPJ inflicted heavy blows to the fascist hordes. The AKP / MHP government of Turkey, and its barbaric ground forces from ISIS and Al-Nusra, are only advancing through massacres and the use of advanced military technology. For almost two months, NATO’s second largest army, together with islamist mercenaries and with the approval of Russia, have been murdering, raping, looting and destroying Afrin.

We are against the war and against the Turkish fascism supported by the international community. Millions of people worldwide are protesting against this injustice, but the responsibles of the massacre are not listening. While the bombs and rifles in Afrin do not rest, and the stranglehold of fascism gets tighter around the city, the nights in the heart of the beast are lit with flames of solidarity.

People are carrying this war back to the places where it is approved, concealed, supported and made possible. Until now, in more than 70 actions in 9 different countries, the agitators and intellectual arsonists of this war, as well as the ones who profit from it, were called to account. Different revolutionary groups and structures are accomplishing their historical responsibilities, and have joined our call and actions. We send them our fiercest greetings.

Answering the first call of fight4afrin, at least 22 acts of resistance have been carried out against fascist institutions and their supporters. Government parties, centers of fascist propaganda, arms companies and their financial partners, police, army and other NATO structures were among our targets. Fire against MIT agents in France, against fascist propaganda institutions of the DITIB and against NATO army vehicles in Germany, against the Turkish consulate in Greece, against the arms company Leonardo-Finmeccanica in Italy. These and many other actions, such as attacks against banks and against the capital that made this war possible, are some examples of what we are able to do.

These actions were responses to the cruel war of extermination against the people and revolution in Rojava. Those who claim these actions have been done by Kurds alone are wrong. The attempt made by the nation-states and the media conglomerates to hold the Kurdish diaspora responsible for the past and future actions, is an attempt to reduce a political conflict to an ethnic conflict, an attempt to criminalize Kurdish people once again and look for the enemy outside. When we claim to be revolutionary cells in the heart of the beast, we are not lying.

The revolution in Rojava is developing an alternative to capitalism, patriarchy and racism. It is an expression of the societal emancipation from rule and state. This revolution is not just a revolution of the Kurds, it is a revolution of all people who fight for freedom and justice in this world. And that’s why we decided not only to protest against this war, but to end it. Russia and NATO, the US and the European states, are responsible for this war. They have the influence to bring it to an end, and if this does not happen we will continue our actions.

As soon as the first Turkish flag waves over Afrin, we will move on to a new phase of resistance. If the fascist forces of the AKP / MHP / ISIS / Al-Nusra set foot in the city of Afrin, we will take our global actions qualitatively and quantitatively to a new level. We make a call in solidarity with the people of Afrin, to continue and intensify the actions in all their diversity and radicality, and to make all necessary preparations in the event of the invasion of the city.

For the rulers of this world: there is only one way to stop us. Stop the attacks on Rojava, stop the war in Afrin.