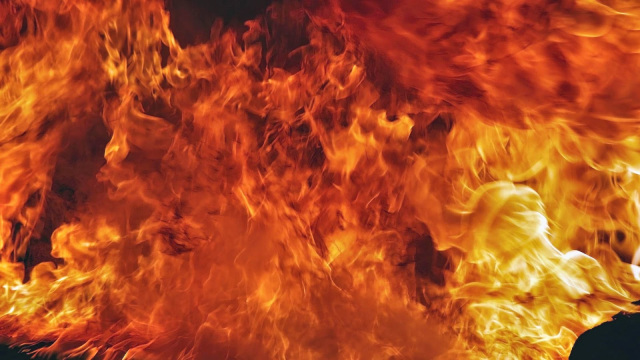 13.03.18: Armed with Molotov cocktails, we attacked and burned some vehicles from the German army (Bundeswehr) in Soltau last night. The trucks were parked on a NATO-wire-secured site in the Soltau industrial area, Carl-Benz-Strasse. We acted in solidarity with the fighting revolutionaries in Afrin.

The police press claims today, the attacked vehicles were only two ordinary trucks and speak of a fire that caused damage of 10,000 €. In fact, they try to cover up that repeatedly vehicles of the Bundeswehr are parked on this site for repair.

The fascist Turkish army also uses hundreds of vehicles from former Bundeswehr stocks in its criminal extermination war against the resistant population of Afrin. Many of the German Leopard tanks but also most of the transport trucks produced by Mercedes, among others, were in use by the German troops for years before they were handed over to Turkey. Since the 90s, it is common practice to sell already used war equipment at a cheap price to Turkey or to hand it over as a gift.

The old anti-militarist motto, “What is burning here, can no longer do any harm elsewhere” applies in particular to arms deliveries to Turkey. It is not unlikely that even the vehicles that are currently being used will end up in the hands of the Turkish occupation army and will be used against our comrades in Kurdistan. With our action we wanted to undertake a direct intervention in the German-Turkish war machine and prove that resolute anti-militarist actions are feasible in 2018 as well. Necessary than ever they are anyway.

We welcome the ongoing militant campaign fight4afrin and are pleased to see that many others are also thinking these days, where and how we can sabotage and attack the war of the rulers and refer to the anti-militaristic research blog. We continue to call for attacking German militarism here.

We dedicate our action to Sehid Efrin Polat. S. Efrin Polat has already heroically fought in the war against the fascist IS and was injured several times. He then went to the war in Afrin to defend the revolution in Rojava. He got into heavy fighting in the village of Qizilbas on the northern front of Afrin and was trapped by the enemy. He fought his way to the last cartridge, saying goodbye to his friends over the radio, and performing a self-sacrifice action in which he fired his grenades at his body.

His struggle lives on in ours.
Sehid Namirin! – The fallen are immortal!