Melbourne, Australia: Action at the Turkish Consulate on International Women’s Day in Solidarity with Afrin

Posted on March 8, 2018 by Insurrection News 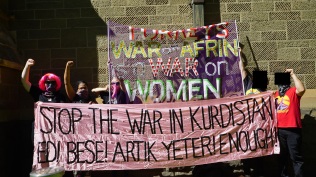 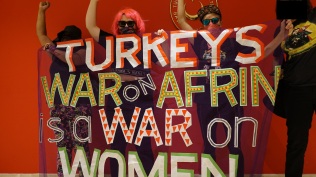 On March 8th, International Women’s Day, a group of women, gender diverse people and a cis-male ally successfully bypassed security and entered the consulate of the fascist Turkish State in Narrm / Melbourne, so-called Australia to voice our anger at Turkey’s ongoing genocidal invasion of Afrin Canton in Rojava / Democratic Federation of Northern Syria.

As consulate staff cowered behind their security console we unfurled a banner that read ‘Turkey’s War On Afrin Is A War On Women’. We began chanting ‘Down Down Erdogan, Turkey Out of Kurdistan’, ‘Death To AKP, Afrin Women Will Be Free’ and ‘Free APO’ (PKK leader Abdullah Öcalan). A male consulate staff member soon began taking photos of us to try and intimidate us but we continued our action. Eventually a different male consulate staff member opened the inner security door and emerged angrily shouting at us ‘What are you doing here?’ The woman who organized the action told him that we were here on International Women’s Day to protest against the Turkish State’s genocidal invasion of Afrin and its brutal killing and mutilation of women fighters defending Afrin. He then yelled at us that we had to protest outside then promptly locked himself back in the security console. We continued our action, not intimidated in the slightest by his aggressive posturing.

Eventually we went downstairs to the front of the building that houses the consulate and unfurled another banner that read ‘Stop The War In Kurdistan’ written in English, Kurdish and Turkish. As we stood out the front of the consulate with both banners several people walking past including a young woman clapped and voiced their approval of our action.

We chose International Women’s Day to carry out this action in memory of all the women who have been martyred defending the Rojava Revolution from Turkish State and Islamic State fascists as well as all women who have been murdered by patriarchal State terror everywhere.