Melbourne, Australia: Report on the Day of Action for Refugees on Manus Island

Posted on November 7, 2017 by Insurrection News

08.11.17: RISE: Refugee Survivors and ex-Detainees called for a Day of Action on November 7 in solidarity with over 600 refugee men who are currently blockaded inside the former Australian-government run detention centre on Manus Island in Papua New Guinea. The Australian government imprisoned the men on Manus as part of their despicable policy of mandatory detention for all refugees who tried to enter Australian territories by boat.

The detention centre has been officially closed by the Australian government and all essential services have been cut including water and electricity. Papua New Guinea police and military have been preventing food and other essential items from entering the detention centre. The Australian government are refusing to take any responsibility or duty of care for the refugees and have been actively blocking other countries from accepting them, insisting that the men must move to a new centre that have been built on Manus. This centre is not safe nor is it equipped to meet the needs of the refugees who are justifiably fearful of being attacked by angry locals who do not want the refugees in their communities. As a result of this situation the 600 men are refusing to leave the Australian detention centre and have been calling on the international community to intervene and help them. Conditions inside the detention centre are grim – no food, no water, no sewage, no electricity and no medical facilities.

The Day of Action was called for November 7th to coincide with the annual Melbourne Cup, a high profile international horse racing event in order to generate maximum publicity. In Narrm / Melbourne, activists responded to the call with a diverse series of actions… 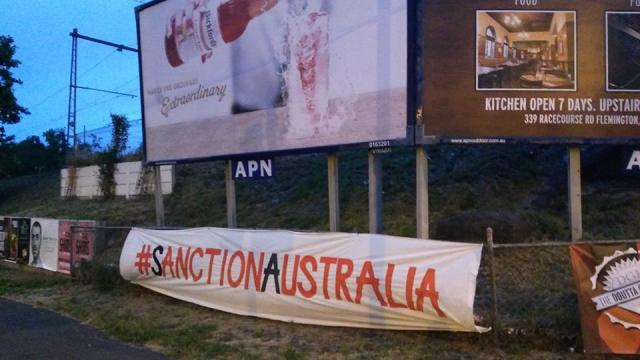 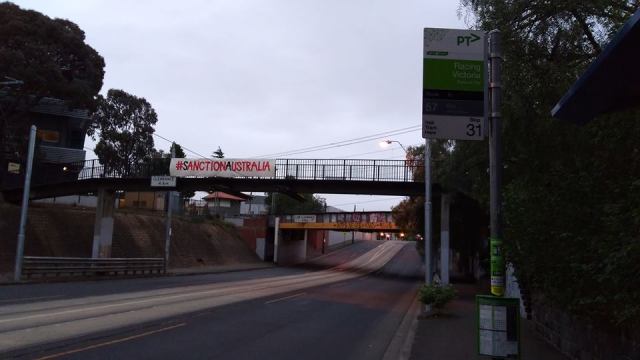 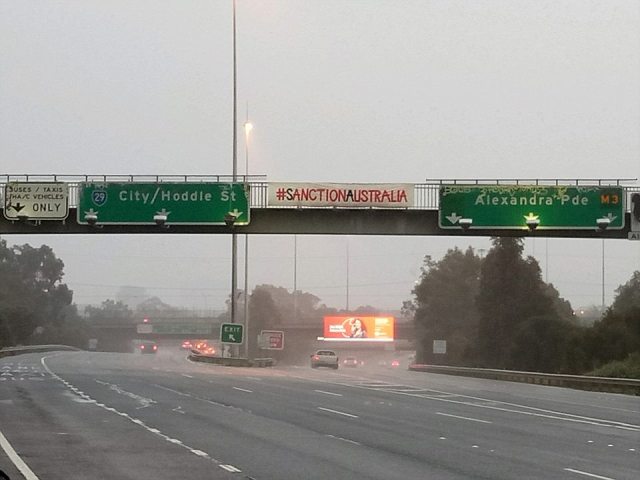 #SanctionAustralia banner drops by the RISE Team and volunteers in front of Flemington Racecourse (where the Melbourne Cup is held) as well as East Link and City Link toll roads. (source) 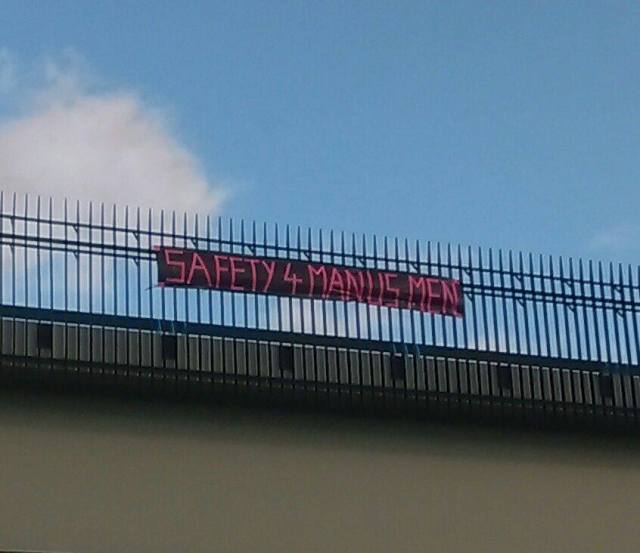 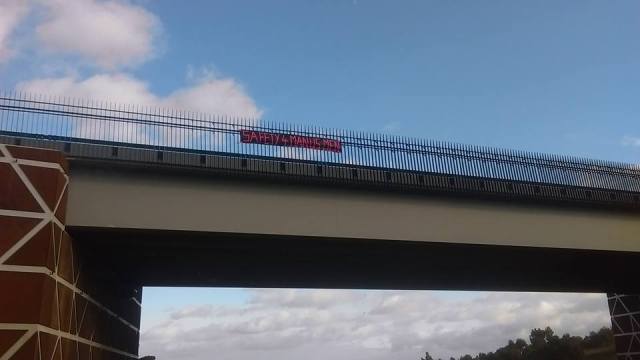 On the outskirts of Narrm / Melbourne, a banner reading ‘SAFETY 4 MANUS MEN’ was dropped from a bridge along the highway to provincial city Geelong. (source)

In the north-eastern suburbs of Narrm / Melbourne, a banner reading ‘MANUS = CRIME’ was displayed alongside a busy highway. (sent anonymously) 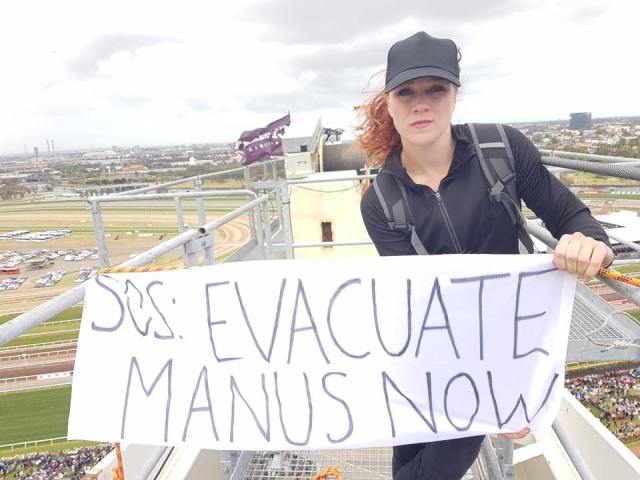 At Flemington Racecourse where the Melbourne Cup was being held, two women activists from the group WACA (Whistleblowers, Activists & Citizens Alliance) entered a construction site on the racecourse grounds and scaled a crane that overlooked the middle of the stadium where they unfurled a banner that read ‘SOS: EVACUATE MANUS NOW!’ The women were able to successfully negotiate with the police and agreed to climb down from the crane under the condition that they would not be arrested and that the banner would stay on the crane. WACA later released a statement regarding the action, here is an excerpt from it:

“We are joining with others across Australia to demand that the government evacuate the men on Manus immediately and bring them to safety for processing.

This is an emergency. This is an humanitarian crisis. We refuse to sit by whilst the Government, with the complicity of the Labor Party, puts over 600 men’s lives at risk.” 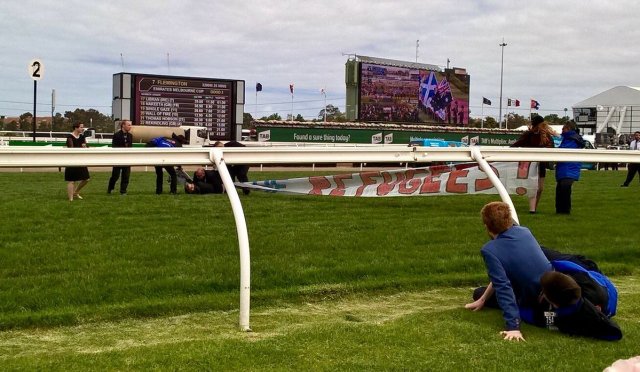 Also at the Flemington Racecourse, members of WACA ran out onto the racecourse itself and unfurled a large banner that read ‘FREE THE REFUGEES!” before being evicted by security. 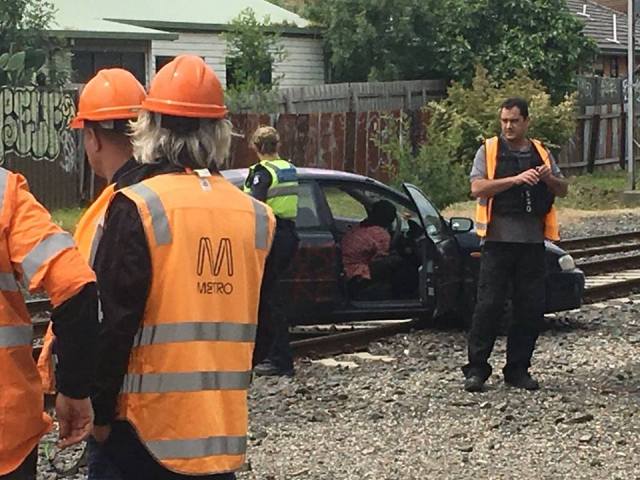 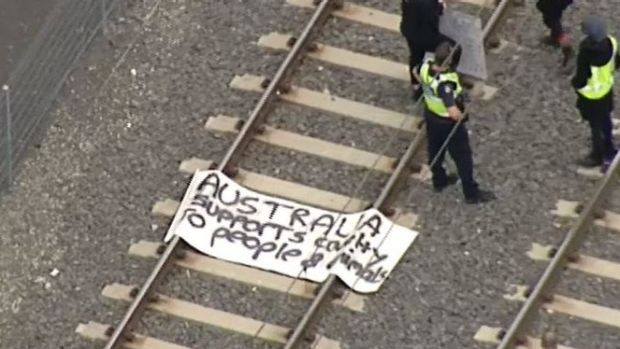 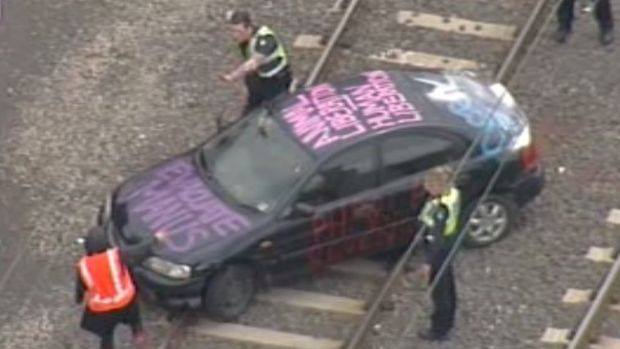 In Ascot Vale, a group of anarchists caused major disruption to trains transporting people to the Melbourne Cup by blocking the railway tracks with a car. The car was covered in slogans in solidarity with the men on Manus and against the Australian government’s barbaric policies towards refugees. A woman padlocked herself inside the car and the car’s tires were punctured to make its removal from the train tracks more difficult. Signs and a banner were displayed prominently highlighting both Australia’s cruel treatment of refugees and also Australia’s celebration of the Melbourne Cup, an event that glorifies cruelty to animals. Police attended the scene and began the time-consuming task of unlocking the woman from the car and removing the car from the train tracks, resulting in lengthy delays in trains services to and from the Melbourne Cup. Unfortunately 4 comrades were arrested, it is not known yet what charges they are facing however all 4 were released later that day.