Posted on October 23, 2017 by Insurrection News 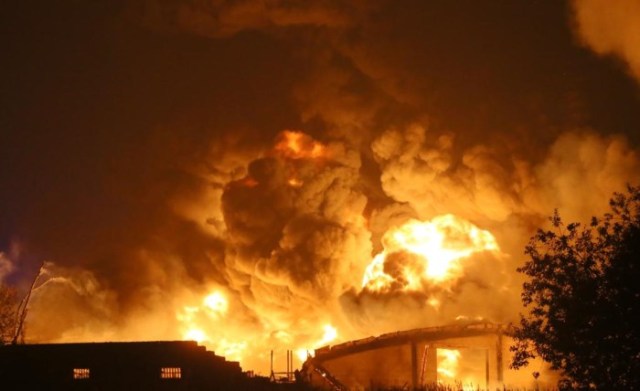 Photo of the fire that completely destroyed the Valec factory in Malines, Belgium, that produced tracks for tanks and tyres for military vehicles for the United States Military

Lucrosum et decorum est pro patria facere? [Is it profitable and proper to produce for the fatherland?]

They don’t speak Latin in Belgium.

At about 2AM on Monday 25th September the residents of Malines (a town half way between Brussels and Anvers) were woken by a string of detonations. As they looked out of their windows they saw a huge fire blazing in the buildings of a local company. In spite of the intervention of many fire brigade vehicles, nothing could be done. Of the 5,000 square metres of the company, nothing remained. Everything destroyed. A hard blow for Varec, a company that produces tracks for tanks and tyres for military vehicles and is a well-known supplier of the Armed Forces in the United States.

If in some smothering dreams you too could pace
Behind the wagon that we flung him in,
And watch the white eyes writhing in his face,
His hanging face, like a devil’s sick of sin;

At 5:40AM on Thursday 28th September the alarm went off at the site of a company in Genk (a town in the Flanders, not far from the border with the Netherlands). Here too fire completely devastated two buildings of the company. The damage is immense. Laboratories and offices were rendered unfit for use, all finished products were destroyed. The 40 technicians who worked there are now out of word. A hard blow for Teksam, a company that produces pneumatic telescopic masts and communication tactic masts for military purposes, sold to the armies of half the world.

If you could hear, at every jolt, the blood
Come gargling from the froth-corrupted lungs,
Obscene as cancer, bitter as the cud
Of vile, incurable sores on innocent tongues

At about 8AM on Thursday 28th September a strange discovery was made by the workers of a company called Forges De Zeebrugge in the province of Liege, in Wallonia. They spotted smoke rising from the roof of their factory. As they went up to have a look, they found gas canisters tied together and attached to a fuse. Army bomb disposal experts intervened on the spot and detonated the device. Prosecutors have opened an investigation. A bad surprise for Forges De Zeebrugge, a company that is part of the multinational Thales, specialized in the production of bellicose material such as ammunition, grenades and missiles.

My friend, you would not tell with such high zest
To children ardent for some desperate glory,
The old lie: Dulce et decorum est pro patria mori

They might not know Latin in Belgium, but at least they are starting to know that those who prepare for war will get war back.

(via Finimondo, translated by Act For Freedom Now!)