Spanish State: No State Will Make Us Free

Posted on October 20, 2017 by Insurrection News 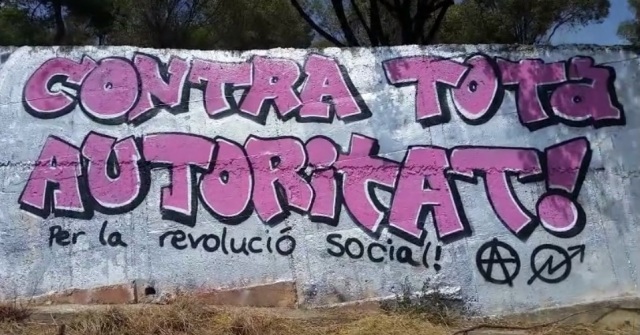 Note from Insurrection News: The following text is a translation of a leaflet that is being distributed by the comrades at Contra Madriz along with a series of posters, pamphlets and stickers that denounce all expressions of nationalism. The material will be distributed throughout the territories currently ruled by the Spanish State. You can read the original text in Spanish and download PDFs of the material HERE.

NO STATE WILL MAKE US FREE

No State, Spanish or Catalan, will give us any kind of freedom. Because the reason of being for every State is to subject the exploited and to guarantee the privileges of the ruling classes. The state regulates exploitation via the law and is responsible for ensuring that the oppressed never rise up against an order that exploits, humiliates, evicts, steals, murders and creates misery throughout the length and breadth of the planet.

No police, Mossos (Catalan police), Civil or National Guard protects us. They are the shock force of the state that protects private property and are responsible for repressing and persecuting those who do not kneel and decide to fight against their rotten world. There are no good police or bad police, all repressive bodies obey a very specific logic: maintain order. Let’s not forget the actions of all police forces in general strikes, demonstrations, neighborhood raids, racist controls, surveillance of prisons, evictions and even as a force of foreign occupation (remember the number of police officers deployed for international missions). They obey and serve their masters.

Democracy, parliamentary institutions and politicians do not look after our interests, but their own interests. No one but ourselves should look after our interests. Electing our masters, voting, submitting to majorities and / or minorities, acting within democratic frameworks…makes us complicit in our own domination and establishes in us the spirit of delegation in officials. We put our lives in their hands. Relying on politicians who only seek (as they all do) to profit from our struggles and our feelings, while submitting us or aspiring to submit us, makes us become a servile mass ready to mobilize or demobilize according to their electoral interests and their struggles for power.

No nationalism or flag should represent us. As the oppressed and exploited we should understand that we have more in common with the other oppressed and exploited than with an entrepreneur or politician who was born in the same place as us. Nationalism and patriotism are tools of power which infect and manipulate the oppressed and make them dance to the tune of the oppressors and bond with our class enemies and their constantly changing projects and needs. The affection for the land in which we live or our language are taken away to justify the creation of new states. Obviously, culture should be something living, in constant evolution and free development between individuals and communities. The state is the death of all free development, building borders and sowing the seeds of racism and xenophobia.

Under capitalism, the state and any form of authority, we will never be free. Let us build a new world on the ruins of authoritarian and state society. Let us build and fight for anarchy, as a constant struggle against all forms of oppression and exploitation, in solidarity and mutual support with our equals, no matter where they come from.

NO NATIONS! NO BORDERS!

(via Contra Madriz, translated by PDF)