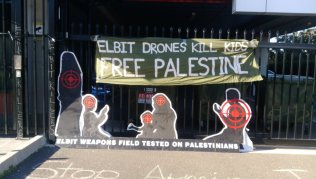 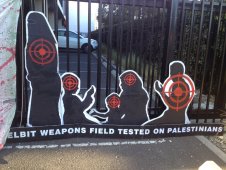 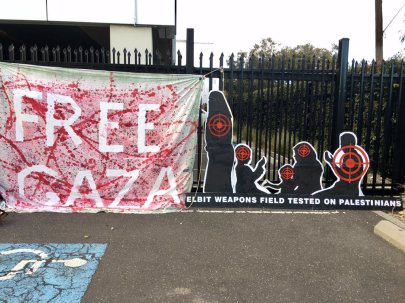 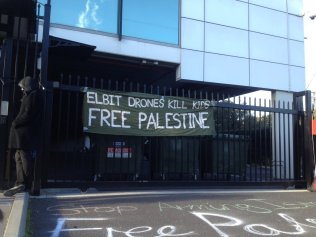 Activists from WACA (Whistleblowers, Activists and Citizens Alliance) have this morning blockaded the entrance to the office of arms manufacturer Elbit Systems at 60 Bertie St, Port Melbourne.

Elbit Systems is an Israeli weapons and surveillance equipment manufacturer  that advertises  its products as “battlefield tested”, due to  its use on the Palestinian people of Gaza.  It makes parts for drones, or unmanned air vehicles, used by the Israeli Defense Force (IDF).  Elbit has an Australian subsidiary that manufactures equipment for the Australian Defense Force. According to Elbit’s website, “Elbit Systems is the largest defence company in Israel and one of the top 30 companies worldwide in terms of defence revenues.”

Amnesty International’s 2014/15 Report on the State of Israel says :

“Israeli forces committed war crimes and human rights violations during a 50-day military offensive in the Gaza Strip that killed over 1,500 civilians, including 539 children, wounded thousands more civilians, and caused massive civilian displacement and destruction of property and vital services.”

This is verified by the UN Independent Commission of Inquiry’s report on Operation Protective Edge, which additionally states that in contrast, only 6 civilians were killed by Hamas.

WACA spokesperson Sam Castro stated “Israel’s ability to launch such devastating attacks with impunity largely stems from the vast international military cooperation and trade that it maintains with complicit governments across the world. By importing and exporting arms to Israel and facilitating the development of Israeli military technology, governments are effectively sending a clear message of approval for Israel’s military aggression, including its war crimes and possible crimes against humanity.”

Israel’s military technology is marketed as “field-tested” and exported across the world. Military trade and joint military-related research relations embolden Israel in committing grave violations of international law and facilitate the entrenchment of Israel’s system of occupation, colonisation and systematic denial of Palestinian rights.

Castro continued, “We are here today to call on the Australian Government to end military trade deals with Israel and to cancel all domestic contracts with Elbit Systems. We, like many other groups around the world, call on the UN and all governments to take immediate steps to implement a comprehensive and legally binding military embargo on Israel, similar to that imposed on South Africa during apartheid.”

This is the third time the pro-Palestinian group has disrupted Elbit Systems, the first time being in August 2014 when they occupied the building’s roof and blockaded the entrance to Elbit during the 2014 Israeli attack on Gaza (see more photos of the previous action ).  The second time was in July 2015.

WACA activist Gaye Demanuele said, “We take this action as we can not stand by while 1.8million people are held hostage in the open-air prison of Gaza. Israel subjects the Palestinian people to conditions which impoverish and traumatise them. While Elbit Systems’ drones daily monitor them from the sky, they live in constant fear that at any moment the IDF will bombard them again using their “battlefield tested” technology. We ask the Australian Defence Minister, Marise Payne, to imagine living under such oppression and ask her what she would do.”