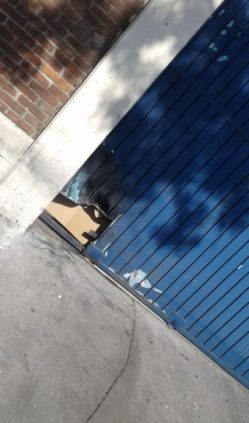 IN RESPONSE to the call for action in solidarity with the anarchists of the Aachen case, on April 16, 2017, at approximately 01:30AM we placed an explosive device that detonated at the facilities of the oil company EXXON in Mexico City, located at North 59, Vallejo Industrial Colony.

EXXON is an oil and chemical corporation based in Texas, USA which constitutes in itself a complete criminal, murderous, genocidal, ecocidal state. It’s long and devastating history has spared no bloodshed with death, torture and exploitation wherever it’s tentancles reach. And then, when the cries of the massacres they cause are silent, they dig the graves with exactly the same machines they use to suck the sweat of the Earth and human beings.

But now it is their turn. Take our offering of hatred and rage! …Because nobody is untouchable! Because we are not intimidated by the heavy silence that you have imposed on your crimes based on fear and violence, and we are not intimidated by the premiere of your Secretary of State…
Are you celebrating your three license agreements for gigantic blocks filled with hydrocarbons in the Gulf of Mexico seabed? We celebrate sabotage, let the anger spread! There are no small actions, the frontal attack and the chaos arrives!

I. And they continue on the same path…

Here we live in an atmosphere of anguish and the spread of fear based on the fact that ‘the new Trumpista government’ has begun ‘a package of aggressive, racist and violent measures against the Mexican people’. Begun? As if this situation didn’t already exist! For a long time now, we have had a system of colonial domination by the great merchants and the financial and military owners of what is known as North America on our backs!

But the most important manipulation that lies at the heart of this new version of spreading fear is the ideological return to the nationalism that lies within the needs of the current reconfiguration of capital. A truly fascist, chameleon-like theatrical performance!

But what do they mean by ‘The People of Mexico’? When what we have here is a prism of different faces disputing territory and power, oprressing one another, in constant conflict! Let’s take off the veil of nationalist fetishes immediately! Belief in the nation only perpetuates racism! Let’s get rid of the ideological chain of belief in ‘the people’! Belief in ‘the people’ only limits the free development and self-affirmation of the human will! They are nothing but binding ghosts!

We do not believe in ghosts anymore…we look at actual human beings and their appetites.

II. About the criminal state’s wall

Who is going to build a wall? Now it turns out that the tragedy of the construction of the wall between Mexico and the USA is being presented as something new. But it’s been a long time since the wall was built! Physically along a third of the nord, but historically with military, political and economic interventions that kill migrants as they pass through Mexico across both north and south borders. All of this in conjunction with the hypocritical officials of the Mexican state, and before the eyes of all…
And it is the systematic dispossession caused by the extractive export pattern imposed on Latin America for the benefit of large international corporations and 1% of the parasitical class in power that the Latin American states violently administer via laws and paramilitary groups – which has led to the forced displacement of the destitute populations in search of the necessary means to survive. But in their path they always find racism, violence, slavery and death. Thousands of disappeared, where are they?

There will be massive deportations? Obama beat the deportation record too! We believe that the constant threat of deportation has the effect of maintaining the climate of fear that is necessary for the acceptance of an upsurge of super-exploitation in order to maintain the rate of accumulation of capital. So we think that this policy of deportation is one more strategy for intensifying the phase of super-exploitation in the workplace and destruction of nature on both sides of the border. Destroy the walls! Destroy the goods! Destroy work!

*Translation note: Coaticlue is the Aztec goddess who gave birth to the moon, stars, and Huitzilopochtli, the god of the sun and war.