Germany: International call for decentralized actions in solidarity with the comrades accused of bank robbery in Aachen 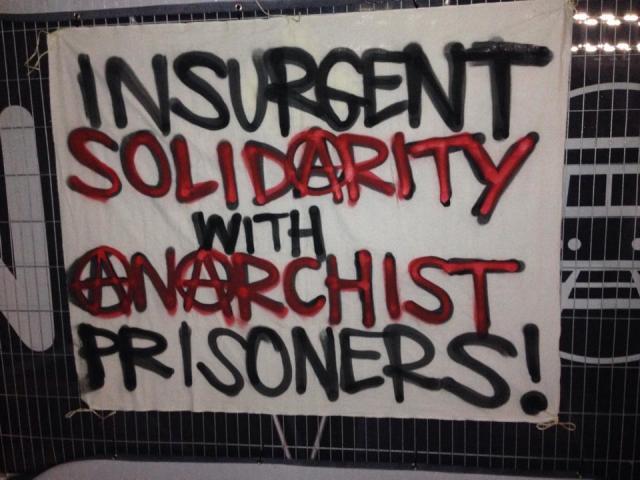 In 2015, a comrade from Amsterdam was arrested. She was accused of having participated in a robbery in 2013 against the Aachener bank in Aachen. After a few months spent in preventive and several weeks of trial, she was finally acquitted and released. Nevertheless, it can be assumed that the Aachen Prosecutor’s Office will appeal this verdict and go to the revision court.

In April and June 2016, two other comrades, this time from Barcelona, were arrested and incarcerated by the Spanish state, accused by the same prosecution office of having participated in another bank robbery. The two were then extradited to Germany in June 2016, where they have since been under the U-Haft regime (investigative preventive prison). The trial against them began in January 2017 in the Aachen Justice complex and it is scheduled to run until May 22, 2017.

It does not come as a surprise to us that those who oppose and fight against the misery of this world forged on domination are attacked, prosecuted and punished. We are not interested in discussing about guilt or innocence, it is the language that belongs to our enemies and we refuse it. Our enemies follow the logic of separation and categorization of individuals, in order to then have the possibility of locking up the undesirables. We share with the accused comrades an aversion to this system, and towards the prison system which perpetuates the distinction between good citizens and those who deserve to be punished.

We hate all the repressive infrastructures of all States, just as all the far-reaching tentacles of the Church, with its long tradition of oppression. The Church is part of the State, linked directly to banks and participating in the maintenance of the control that is imposed on us daily.

Considerable steps have been taken in the development and the role of repression in our daily lives. New technologies and progress in the deciphering of DNA, biometric analysis, surveillance cameras, …. So many instruments used to study, scrutinize and control. They also represent part of the structure, part of our enemy, against which we take a position and which we want to destroy.

The collaboration of the police, judges and investigators from different States is an old strategy that has been updated in Europe to contribute to a faster, clearer and more cruel Capitalist system.

With our veins filled with rage, strength and courage, we set off to the streets. Reinforced with every repressive blow, we stand by our comrades. We show them through the continuation of our struggles and through our solidarity the desire for the destruction of a system we do not want or need.

This is a call to solidarity with the anarchists accused of robbery in Aachen. It is a call to maintain the links between the rebels and the oppressed wherever possible throughout the world.

We use our instruments to sabotage and attack, destroying the structure of power. We use our imagination to express our solidarity in all its variations while our passion inspires us to continue our struggles.
We therefore call to express solidarity with the comrades in the week between April 17th to 23rd.

Nothing is finished, our struggles continue! Until all are free!
Solidarity with comrades on trial in Aachen.
Freedom for them! Freedom for all!
For revolt! For anarchy!

February 2017,
Somewhere in this world

(via solidariteit, original German language text can be viewed at contra info)