Posted on December 30, 2016 by Insurrection News 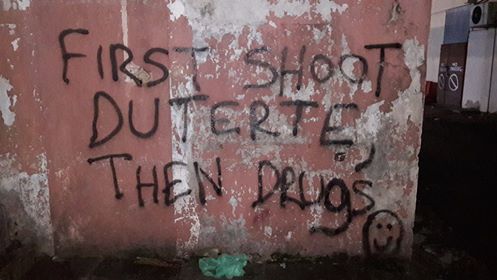 Drug users are taking autonomous action to speak out against the murderous regime of Rodrigo Duterte, recently elected President of the Philippines.

Duterte, a hero to cops and Catholics, was elected with 93% support. His campaign was fueled by populist rhetoric which specifically targeted drug users, and promised both amnesty to those murdering drug users and bounties for the bodies of dead drug users.

Since Duterte took power in May 2016, police have been encouraged to follow Duterte’s policy during encounters with suspected drug users; subsequently an average of 20 drug users a day have been slain in a nationwide extra-judicial rampage by police and vigilante Catholic “citizen” groups.

Duterte has publicly boasted that whilst he was the mayor of Davao province, he would “drive around looking for someone to kill”, as an example to police saying, “if I can do it, why can’t you?”.

Despite having close political ties with the Philippines, including the power to influence domestic policies, nations such as the United States, and economic structures, such as ASEAN (both which purportedly have a commitment to human rights), have not spoken out in defense of drug users, or criticized Duterte’s blatantly fascistic methods.

Drug users in the Philippines encourage their friends across the Asia-Pacific region and the world to undertake sustained autonomous action to highlight the situation drug users are facing. Some of the communities most visibly affected are street based men who have sex with men and sex workers. Filipino drug users encourage all form of action to stop Duterte, and to end the slaughter of their community. They say: “We don’t just want Duterte out, we want to change the system here, especially the Church which brainwashes people into believing some of us are evil because of who we are and how we live. A system and religion which allows this to happen is sick.”