Greece: Regarding the Week of International Solidarity with Anarchist Prisoners 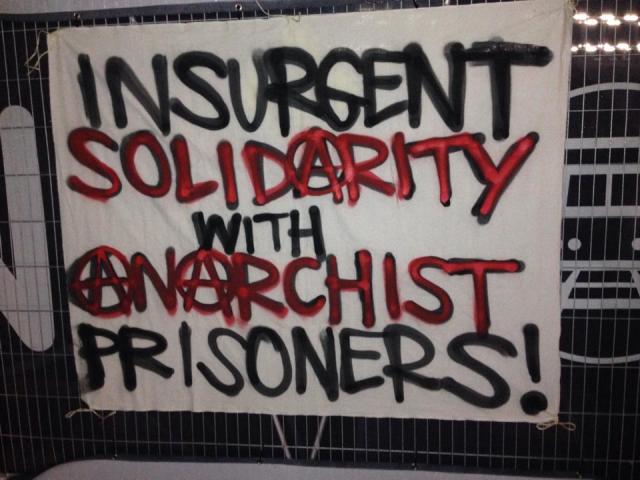 It’s been years now that the various state agencies of repression order the conduct of investigation under the sole criterion the suspects’ political status. This is the status of the anarchist, mainly of the one who turns his/her ideas into actions, of the one that arms his/her desires and attacks state authority. So each investigation has to do with the possible prosecution of comrades according to the laws of their “democracy.” Police prosecution that starts off with texts and extends to all possible actions is not new among the anarchist circles. On the contrary, there is a past record on relative prosecutions in countries such as Italy, Chile etc. where there is a strong comrade presence promoting direct action and intervention.

The common goal of contemporary international police is the prevention of anarchist propaganda, anarchist action and the spreading of our ideas. For this reason, in many cases they don’t even hesitate to put aside the refined mask of “democracy” that supposedly allows “freedom of speech and ideas.” And thus, any illusion that anyone may still hold is withdrawn.

Things are now clear: “anarchist action or speech is either illegal or nothing at all!” The new form of repression is currently being practiced upon many of our prisoners that find themselves under illegal restrain with accusations based on their political identity and having taken up the political responsibility for their actions as well as their organizations’. It is certain that in the future this strategy of preventive repression, of persecutions with the maximum of penalties, the fast track trials as well as the effort for isolation and silence, will be implemented everywhere, or at least they will try to: apart from our prisoners, it will be attempted on anarchist hangouts and self-organized places that defend and propagate the anarchist values.

Alongside with the most recent trials they are the dress rehearsal for the new doctrine that the state desires to set into effect. The new way of repression is basically an update of previous doctrines which establishes the preventative repression of subversive speech for our prisoners. The production and distribution of practical manuals for action or texts promoting the anarchist urban guerilla warfare will be treated as “terrorist actions” incurring years of imprisonment. State power seeks to measure thus the reactions and the silences, and as long as we remain silent these practices will continue to upgrade. All of these form the chains of repression and silence of anarchist discourse.

The fact is that in recent years the names of those arrested for anarchist action are similar in volume with the names in the pages of a telephone directory. The arrests, the prosecutions, the imprisonments, the convictions, outline due to their frequency a relatively common condition. The state implements the shock strategy, seeking to create an accepted reality where no one will ever wonder or feel surprised by what happens. Imagine that a few years ago we could not conceive the prosecution of some imprisoned anarchists for their texts. Today state power tries to establish a wilderness of reactions within the entire competitive movement. But we should insist on speaking out and taking action.

We know that our anarchist words may not address the many, but we know that there are still people who do not conform, or wait until the next riot to express their intentions, spending the intervals in a stand-by state and idleness. Besides, anarchist action has no start or end date, on the contrary it pours out all year long. These are the people we call out and look for; the ones who will hear the voice of our prisoners and spread it as much as they can making the nights of the rotten and diseased society most exciting, bearing gasoline fumes, rage and anger.

They are the comrades who don’t forget our comrades within the cells and regardless of the tendency they follow, they believe in the insurrectional power and find themselves on the threshold of taking action.

The words of our prisoners that escape prisons, attempt to break the simple “paper wall” of texts and translate themselves into actions. It is a way to communicate with our brothers and sisters, not only here in Greece, but also internationally for the support and spreading of their voice and show the state that they are not alone. To all the judicial fury unleashed upon them, our voice is our weapon and the concrete solidarity that we can express towards them is the bullet in the brains of state power. From what it seems from the inside, and along with our concrete solidarity from the outside, they will take into consideration and be worried about the spreading of anarchist discourse. We really want to confirm their concerns. Hence we do everything in our power to achieve it. That’s why we won’t stop taking action, as long as we breathe. Because memory is a well-sharpened razor. Because anarchist discourse is the essence of life that we define through actions. And we repeat it so that they don’t have the slightest doubt.

UNTIL ALL CELLS AND CAGES ARE DEMOLISHED, WE WILL NOT TAKE EVEN A MILLIMETRE OF A STEP BACK.

FREEDOM TO OUR BROTHERS AND SISTERS.

Make your voice a weapon