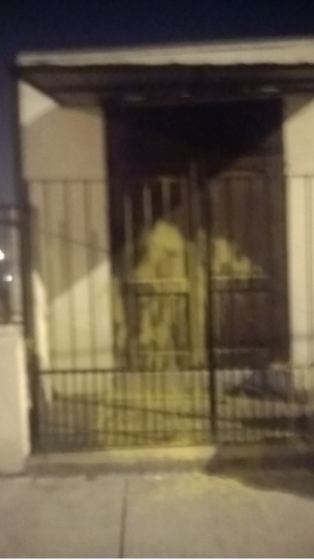 Anti-clerical violence has been unleashed with force as one more expression of the anarchic conflict against power and all bastard authority. The impact has been varied, politicians scream for the imposition of new laws and tougher penalties for those who attack order and the symbols of capital. The press plays it role of defamation and talks of social peace, ultimately pro-government. The citizenship, the sheep criticize everything without questioning their rotten enslaved lives and the religious ones cry as always appearing like the good ones in the movie.

We extend and claim the anti-clerical violence because we see the church as one more piece of domination, which is demonstrated by their influence on the policies of social control. Encouraging the power to impose new laws of punishment and fascist morality which are reaffirmed by vain speeches cloaked with a non-existent god that people believe without question for a life sentence that ends in a heavenly paradise. Who can believe in such a story? What a load of shit.

As an expression of a minimum anti-authoritarian gesture in response to the international call for long-term prisoners, on the night of June 14, camouflaged by the dismal fog that fell on the disgusting city of Santiago, we stained with ink two temples of pedophilia, money and crime and scratched the words “against all authority, anarchy”.

All our strength to Kevin Garrido and Joaquín García, and the subversives Marcelo Villarroel, Freddy Fuentevilla and Juan Aliste. We do not forget the insurrectionists.

Mauricio Morales and Sebastián Oversluij are present in every act of vandalism.

Constant attack against religious morality!
Solidarity and strength to the prisoners!
Not even God can stop the social war!

1 Response to Chile: Ink attack against two temples of religious morality in Santiago