Posted on February 29, 2016 by Insurrection News 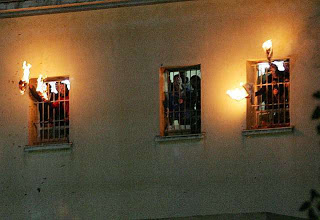 Prisoners in Korydallos began mobilizing on the 24th of January 2016. The mobilization was initiated by prisoners in D wing after having suffered consecutive power cuts which prompted prisoners to react and delay midday and evening lock down by two hours (12:00-14:00 and 20:00-22:00). In the meantime more prison wings became involved in the mobilization, initially as an expression of solidarity with the demand of D wing although they later decided to add a demand regarding the removal of the current prison manager Charalambia Koutsimichali.

In the early morning of the 6th of February, prisoner Fabio Dusco was abducted from his cell in D wing by the police after having arrived there just the day before. Fabio is a defendant in the trial against the Conspiracy of Cells of Fire and specifically the case regarding their plan to escape from prison. Since then he faced detention at the Attica Removal Centre for a week and then was placed in solitary confinement at the Athens Police Directorate. Fabio is now on hungerstrike since the 15th of February for his return to Korydallos prison. After his abduction we have kept the prison yard open from 8:00 to 19:30 despite the prison’s timetable which permits access to the yard only during the following times: 8:00-11:00 and 14:30-17:30.

VICTORY TO THE STRUGGLE OF PRISONERS

(via Mpalothia, translated by BlackCat)